As you may remember from my last post, I'm busy decorating at the moment and so finding any time at all to dedicate to my art has been a tad difficult :( To make things worse, the weather here in the UK is a bit changeable for the Bank Holiday weekend. Despite all that, in between the dark bits, I managed to sneak away from my painting duties. Loiue the Beagle had been patiently waiting for his walk all day so I took him for a walk by the riverbank and, while he was bounding around making his own fun in the long grass, I managed to do a couple of pencil sketches. These were done on facing pages in a W&N heavyweight A6 sketchbook with a 2B pencil. Happy weekend everyone! 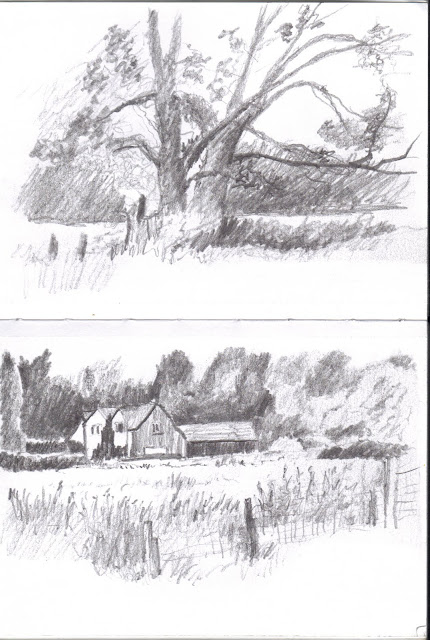 No, it's not a spelling mistake, but it is intended to be a pun. It's been a pretty uninspiring week at work, certainly not one in which I felt the slightest amount of charisma, so I was ready for the usual Friday afternoon ramble with Louie The Beagle along the country bridleways and footpaths and the chance of a little bit of sketching.

After sitting pretty much idle for the best part of twenty years, I decided it was about time I used my much coveted Karisma coloured pencils. I only have a few left, about thirty or so, and some of them are very little more than half their original length, in some cases just stumps, but they're still very usable and full of that gorgeous soft rich colour that made them (and still does make them) sought after. I just wish I'd bought bucket loads of them when I had the chance :( Still, I do have my Coloursofts :) Here they are in all their glory: 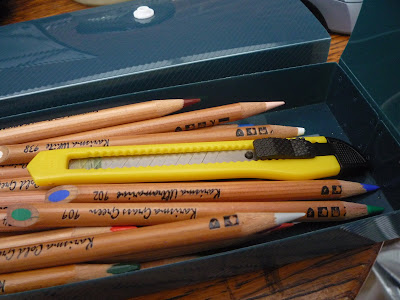 Well that's enough rambling: here for your enjoyment is an A5 sketch using only Karisma pencils in a Daler Rowney wirebound sketchbook. The place is a few miles from home, somewhere between the towns of Huntingdon and St Ives. I completed the entire sketch on location in about forty-five minutes: long enough for Louie to take a break and enjoy the sunshine!

Have a good weekend! 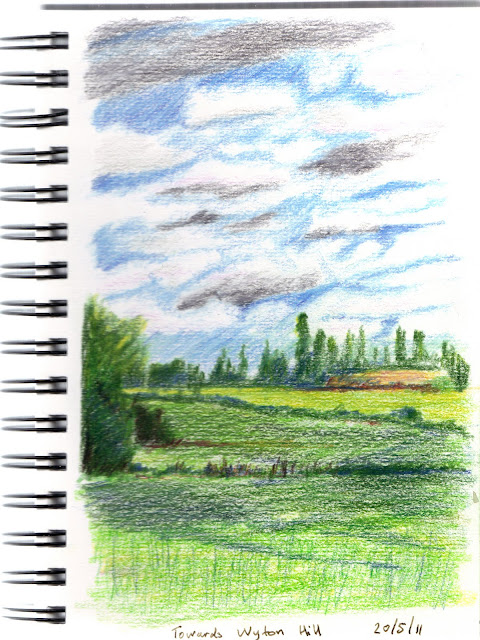 A second pause for thought

In this version I've lightened the wall behind the statue and then lightened and deepened the colours in a few other places, with emphasis on getting more light against dark contrasts, to give what I think is now a more pleasing result. Thank you Pat and Judy for your helpful suggestions :)

I pass this wonderful statue on my way home from work .. well that's if I decide to go through the town centre for a bit of shopping, rather than the quick way home. I bought a new sketch book and a snazzy collapsible biro in town and so, armed with my new purchases and fancying a little break before I made my way home, I sat in the market square and sketched the war memorial in front of the old Court House and Mayor's Chambers. I must be getting more comfortable with plein air sketching now - I just ignored any passers-by and got on with it! I added coloured pencil at home., some from memory and some from reference to photographs on the web.

I've not had a lot of time to devote to my art this week but I have been having a lot of fun trying various watercolour techniques that I hope to use in a bigger painting that I keep promising myself! I also haven't managed to get out to do any sketching so I used an old sketch that I did about nineteen years ago (where does the time go?) as a reference for this little 7x5 watercolour. I had no colour notes so I had to rely on my memory and invent a little bit.

The location is a beautiful little village called Laycock, a place I used to walk to and sketch when I lived and worked in the nearby town of Keighley in West Yorkshire. I just liked the composition at the time and really glad that I never binned the original sketch :) 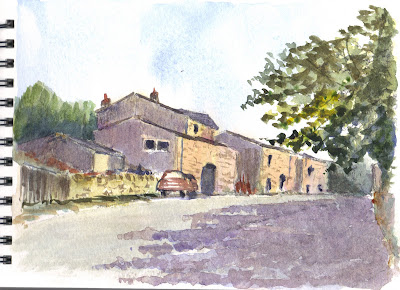 And as a footnote and as requested by my blogging friend and first follower Sandra, here's the original page from my sketchbook. Personally, I prefer the old sketch ! What do you think ? 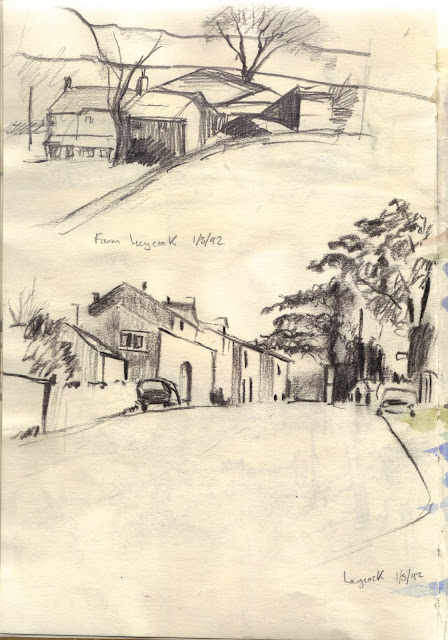 On top of the world

Oh my goodness, I've managed to acquire ten followers! That's double figures :) I'd like to say a big thankyou to all of you for bothering to stop by and take a look at my blog and to leave such nice comments.The nice thing about this blogging stuff, as some of you have said before, is that it makes us dedicate more time to our art work. In addition, the feedback that we get, be it good, bad or indifferent, encourages us to do even more!

One of the blogs that I follow is that of Chris McGrady who lives in South Western Colorado at an altitude of 9600ft where it's probably too cold outside to even pick up a paintbrush for a large part of the year but she still manages to produce some mighty fine work and lots of stunning photographs of the beautiful place she has chosen to live with her family. Inspired by her photographs, and with a deep and long lasting love for the high, remote places of the world, I dusted off the Schmincke watercolours and painted this from imagination. I hope you like it. 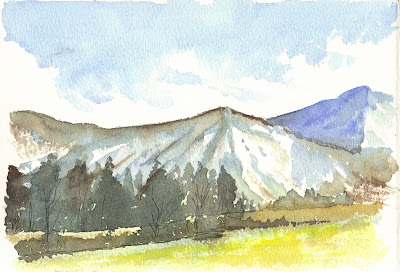 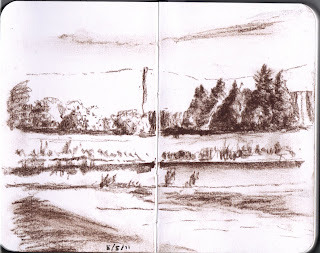 Back to work for me this week so not a lot of time to spend on my art :( However, it was a short week and now it's Friday night - yay! Despite all the rushing around I managed to do two monochrome sketches. I do like to just draw sometimes and I think it helps to 'see' better and to sort out tonal values without worrying about colour and technique.

The first sketch was done in the local riverside park on the way home last night. I used a Bistre Conte crayon in a Derwent Journal - about the same size as the smallest Moleskine. 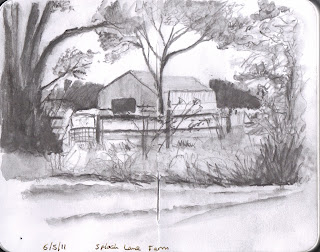 The second sketch was done on my usual Friday afternoon three hour dog walk. It was absolutely baking hot and luckily I had taken a water bottle and tray to give Louie a well-earned cool drink while I settled down to sketch.

I used watersoluble graphite pencils and a waterbrush, working again in my Derwent journal. 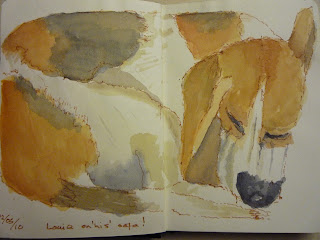 Hopefully I'll get back to do some serious painting very soon. In the mean time, have a good weekend everyone.

One more thing, just for Pat Elliott, one of my lovely followers, I've included a sketch from last year of my sketching companion and best friend Louie the Beagle!
Posted by Unknown at 22:19 11 comments
Labels: Conte Carres, Derwent Journal, Watersoluble Graphite

Finding a bargain in the city

I've been on a nice long relaxing break recently; with the coincidence of Easter, the Royal Wedding and May Bank Holiday making  two long weekends, and the addition of a few extra days, we've been able to take a well-earned long break from our hectic jobs. The problem is that we've also managed to make quite a few trips to local towns over the break and as you all know ... that means art shops! More on that later.

We visited Ely a few days ago; the journey from Huntingdon taking us through some of the prettiest parts of Cambridgeshire past shocking yellow fields of rapeseed (sniff, sniff) and giving us the most spectacular view of the cathedral which is visible across the flat landscape from quite a distance out. It is for these spectacular views that it got the title 'Ship of the Fens' and the inclusion on a Pink Floyd album cover. Before the Fens were drained, Ely was an inland island and a county in its own right named the Isle of Ely until 1965.

After parking up, we felt a bit peckish and so we decided to treat ourselves to a delicious light afternoon meal in the beautiful walled gardens of the Almonry tearooms, behind which the awesome stone mass of the cathedral rises. It really is a beautiful backdrop and, though I wouldn't class myself as a cathedral expert, this one must be up there with the best. The tranquility of the scene was only disturbed occasionally by the low pitched rumble of the local trains making their way across the Fens between Cambridge and Peterborough and a noisy, low flying and large military plane rudely reminded us that we were quite close to one of the county's many air bases.

We love to walk around the city - it is a city because of the cathedral but must be one of the smallest in the UK - and strolled through the local park on the slopes below the cathedral as we made our way down to the riverfront. The fields in the park were home to what my wife thinks were Icelandic ponies and also one of the most amazing trees I've ever seen. The ponies seemed to like using the long, twisting, low hanging branches as back scratchers! On the way back to the car park we did a little bit of shopping at the local market and I went into the art shop for a browse ... fatal. I was delighted to see that this wasn't going to cost much as they were selling assorted bags of 18 Daler Rowney watercolour pencils for forty percent of their RRP so I carefully selected two bags. Oh yes, and I bought a couple more sketch books too :) 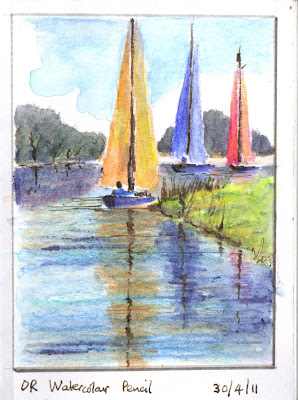 I was delighted with my purchase when I realised that for £20 I had almost a full set of the pencils with just a few duplicates and only need another seven to complete the set of thiry-six available colours. They first seemed to be a lttle weaker than some other brands I use when first wetted on the paper but then they seem to liven up to give very rich pure colours after drying. Personally, I love them and think they may become my favourites. All of the colours are sensibly named and match popular watercolour pigment names.

So, yesterday I played around with my new pencils, trying various techniques before I finally worked on a complete sketch. This is just A6 and based on an earlier pastel sketch I did. It's purely from imagination but I'd like to try working on a bigger scale on a real world plein-air drawing/painting in the near future.


That's it for now. Back to work on Tuesday so I may be a little while before posting again :(
Posted by Unknown at 08:52 4 comments
Labels: Watercolour Pencil, WN Heavyweight A6
Newer Posts Older Posts Home
Subscribe to: Posts (Atom)

This is a Flickr badge showing public photos and videos from mikebailey61. Make your own badge here.